More (I'll look into your heart)

The song began as an instrumental piece titled Models in Blue/Modelle in blu for the soundtrack of Mondo cane (1961, directed by Gualtiero Jacopetti, Franco Prosperi and Paolo Cavara), a parent documentary of the "Mondo" film series, which took a morbid and truculent approach to the habits and customs of different populations. Presented at the Cannes Film Festival in 1962, the film received the David di Donatello for Best Producer and in 1963 the piece, enriched with an Italian text, was awarded the Grammy and had the honour of an Oscar nomination for Best Song. During the awards ceremony, it was performed by Katyna Ranieri, wife of the composer Riz Ortolani, to date the only Italian singer to have performed on the stage of the Oscars.

At that point, it achieved international fame and the English version (based on lyrics by Norman Newell) was recorded by various artists until it became an international standard. It is the second Italian song in the world by number of versions after 'O sole mio, according to the website "Second Hand Songs": there are 282, which places it at number 340 in a list that almost exclusively includes titles in English. Standing out among these are the recordings by singers for adults such as Kai Winding (the only one to climb the American charts), Frank Sinatra, Herb Alpert, Nat King Cole, Doris Day, Julie London and Connie Francis; pop stars like Brenda Lee and the Supremes; jazz musicians like Erroll Garner, Joe Pass and Charlie Byrd. In Italy, it has been recorded by Bobby Solo, Orietta Berti, Tony Renis and Andrea Bocelli, among others. 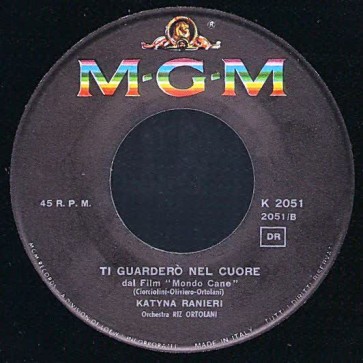