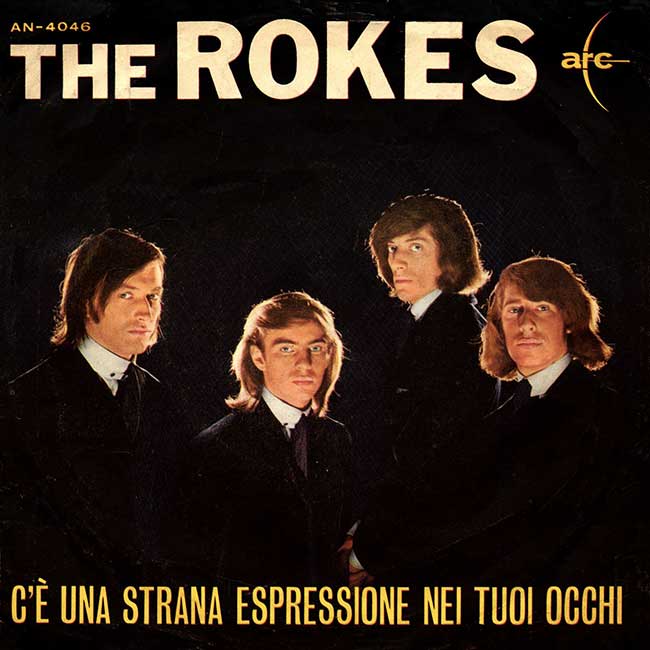 Shel Shapiro of the Rokes: “When we made C'è una strana espressione nei tuoi occhi, I eliminated the recording in the original simply because I didn't remember it. We had heard the version of When You Walk in The Room by Jackie DeShannon, who was a singer I loved madly, and not the Searchers' version, which by the way, I always liked a lot, and Needles and Pins in my opinion is an extraordinary piece. I had heard Jackie's piece, but didn't have the record; I remembered the riff, I remembered the melodic line, but the recording just didn't come to mind. So our version sounded a little different from the one by Ricky Gianco, the Camaleonti and the New Dada, and we had also changed the way the melody was divided on the verse a lot. When I recorded it again for the Backstage album, the stage musical I did two years ago, I finally included the recording. I don't remember if Jackie DeShannon's version was faster or slower than ours, which was certainly slower than the other three out there. And this was one of the fundamental differences between us and the other Italian beat groups, in the sense that, on the one hand, there were those who had just acquired rock, namely those Italian artists who were eighteen to twenty years old in 1960, and on the other hand, those like us, who had grown up in it. I remember that the first records of a certain type of music started coming into our house when I was still six or seven years old. Then I started listening to things that were farther and farther from the daily hit parade, even though the English hit parade was naturally much further ahead than the Italian one. So, going back to the various Italian versions of When You Walk in The Room, the difference lies in the fact that those who had grown up with rock could never make the very nervous riff like the Camaleonti did, it just wouldn’t occur to them. It's a riff conceived well above the music, on top of the music, and it's very different from a laid back, pulled back riff, as if it were heavy, because rock music is heavy. The Italians always played it very lightly, it was never pulled back. Instead, very often, all the great rock pieces, you hear them almost slow down, and also in heavy-metal, the same thing happens, because the concept of rock is that, you don't get above the music, but you arrive from behind.  In fact, Italians also play rock this way today, because it has now become an assimilated musical language, whereas it wasn’t then. And it’s for this same reason that, very often, the covers that the Italian bands did were very, very naive, at times they weren't even copied very well. Maybe many bands were actually learning how to make a new kind of music”.