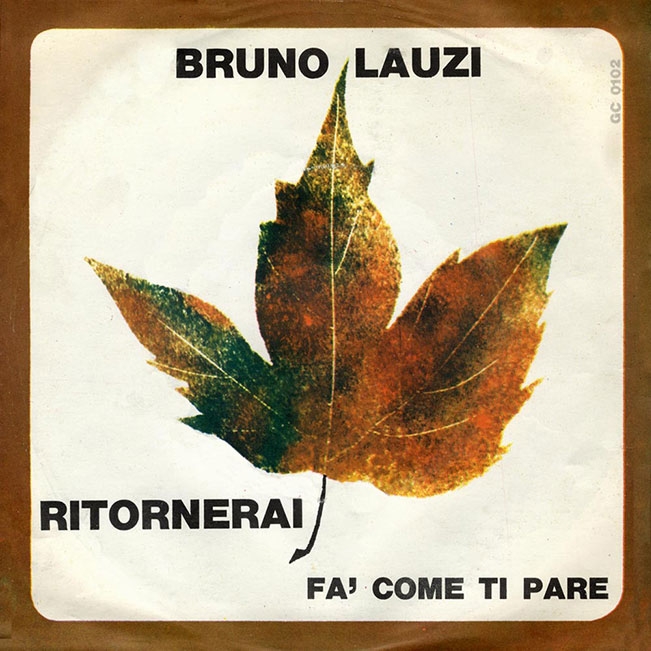 On 3 August 1963 I am at Silverio Pisu's house, in via Omboni 1, Milan. It’s early afternoon, and we’re about to leave on vacation. We are going to Albisola where he has a home. The suitcase is ready in front of the door, the guitar is on the bed. Silverio goes down to buy cigarettes, it’ll be faster on foot than by car, he says. I'm alone. I take a blank sheet from the desk and I jot down a few words in lines posing as verse, then I take the guitar and accompany them: when, a few minutes later, Silverio returns I make him listen to the song I have just written.“I would call it Ritornerai [You will return] what do you think?” I ask.“I say you’re taking the piss,” is his sharp reply.He never believed I wrote it there and then, in those few minutes that changed my life, and I stopped trying to convince him.After the holidays my life in Varese is pretty uneventful. One evening, while in the grip of a typical post-abandonment melancholy, I join a couple of friends who decide to take a trip to Campione d'Italia. They go to the Casino, I wait for them in a little bar on the square in front of the lake, drinking something. There is a young Genoese, Marcello Picasso, who is playing the guitar and singing songs by our singer-songwriters. He recognizes me and invites me to sing O frigideiru (for a change). I accept, but I need to vent my sadness and without giving him time to stop me I throw myself into a performance of Ritornerai.Just like in a musical, at the end two very serious gentlemen invite me to their table, introduce themselves as record producers and beg me to go the following day to  Ariston Records and audition that song to Alfredo Rossi, the owner. The meeting takes place and everything is proceeding well when the man who introduced me, Rino Icardi, a Rai journalist, comes out announcing Ritornerai with a: “Now listen to what we have written”. I put the guitar down and grab him by the throat. “I was joking,” the wise guy mumbles. Alfredo Rossi laughs. I leave there with my first real contract in my pocket.