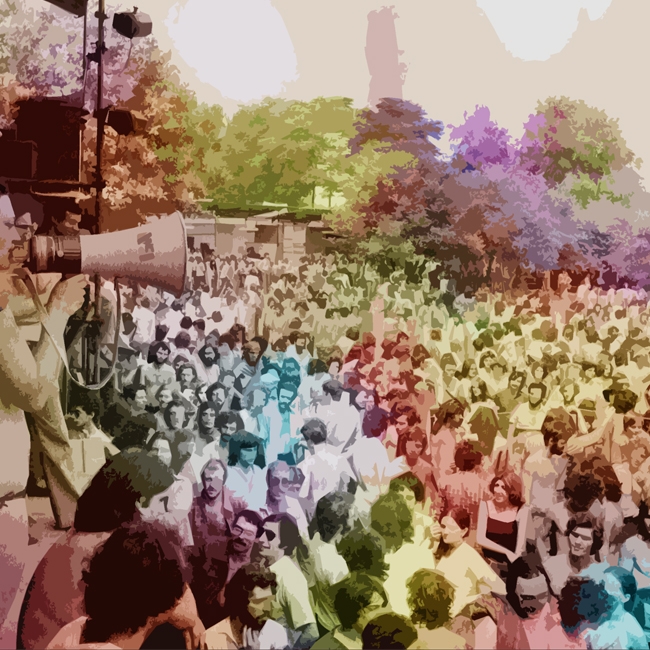 After a half-aborted experiment, dated May 1968 (Rome, Palazzetto dello Sport), Palermo began to host pop festivals in Italy starting in 1970, doing so for another two years. The fashion then spread, thanks to the great popularity of progressive rock, Italian and foreign, and the desire to find and experiment with new forms of bringing people together. From Rome (Caracalla, Villa Pamphili) to Viareggio, from Licola to Santamonica, the first half of the 1970s celebrated the "festival" format as an original combination of music and young people socializing. Among the most original were the festivals organized by the counter-culture magazine Re Nudo, which ran from 1971 to 1976, when the dream abruptly stopped at Parco Lambro, in the centre of Milan.

"26/29 June 1976. The Sixth Festival of the Proletarian Youth. A disaster waiting to happen (...) a large-scale representation of the evolutionary impasse of the youth movement, which was about to face the perilous passage between the Scylla and Charybdis of armed conflict and heroin. An event so dramatic that it overshadowed all previous experiences (...). Over one hundred thousand people, many of whom had nothing to do with the cause, amid the squalor, confusion, widespread violence, everyone against everyone. The presumption of giving guidelines to the audience went against the slogan shouted in the face of the organizers: 'Away! Away with the new police!'

The City of Milan, despite the vast size of the human mass, refused to hook up the electricity and water (...). To bolster the festival of brotherhood, there were two leaders of the American counterculture: Julian Beck and Jerry Rubin. The fine house everyone had imagined revealed itself to be a dangerous hovel. There was a small jewel in the storm, the jazz player Don Cherry with his group, magical, elegant and floating in the air despite the setting (...). Some of the musicians and groups included Eugenio Finardi, Area, Ricky Gianco, Gianfranco Manfredi, Napoli Centrale, Nacchere Rosse, Veronique Chalot, Jenny Sorrenti, Agorà, Lyonesse, Tony Esposito, Canzoniere del Lazio, Pino Masi, Roberto Cacciapaglia, Claudio Rocchi, Living Theatre, Sensations’ Fix (…)

The angry audience turned nasty, and vented their anger toward  the stage in waves. Mostly made up of the repressed and hungry working-class masses, they were full of resentment towards the greedy organizers who sold food and drinks of dubious quality at inflated prices (...). The collapse of a fanciful ideological project burst into 1000 fires. Supermarkets were looted, and frozen chickens (inedible!) were used as footballs for impromptu matches. The forces of law and order armed with sticks searched the tents in search of frozen chickens. Homosexuals and feminists were physically threatened, their stands smashed, heroin addicts beaten and thrown out of the festival, small time weed dealers summarily tried. Meanwhile, the refuse piled up, the police charged and used tear gas, trying to identify the vandals among the people. And yoga, massages and tarantellas, internal line-ups, whistles and punitive nudism, like a prison search. People stripped not out of joy but out of desperation. No liberation came (...). A participant in the midst of delirium had very clear ideas: "We’re going naked toward madness!" It’s a convincing live reproduction of the illustrations made by the artist Gustave Dorè for Dante's Inferno".