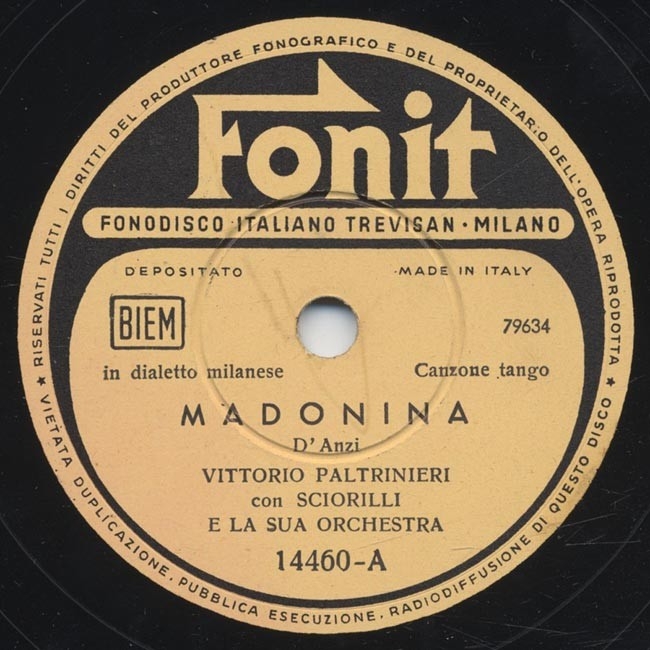 Much of the summer of 1935 had passed and D'Anzi had not yet found the idea that would be a good alternative to the "Piedigrotta", the "roundup" of Neapolitan songs that closed the Trianon shows. Until one evening in mid-August.

“Linda Pini, a famous movie star who was not above singing a song, was the star of the show and a very dear friend. Every night, before going down to the venue, I took a look at the show and thought, look at these people, they sing the best songs from Naples and Rome, but to make money they have to come to Milan!” This is how D'Anzi describes the first ideas of his most famous song. The next day he was talking with friends while walking in the Galleria, before going to the office. Some were smiling but agreed with him, some were perplexed because it was too ironic and some, like the maestro, were convinced that it was the right path. Two months passed and in October the song began to take shape. It was the first time that D'Anzi had written lyrics. Bracchi, a friend and lyricist, didn’t mind: he was eager to see the result of this strange "joke":

"And one evening, for fun, I say to Linda Pini, ‘Listen, if I bring you a song tomorrow that’s a sort of little tour around Naples and Rome, would you sing it for me? You know, to see the look on their faces ...!’ And Pini, who was half crazy like me, accepted. That night, in three hours, to pull a joke on the Neapolitans, I did everything. I brought the words and music to Linda and two nights later, at the end of the show, she announced a new piece, my song Madonina".

D'Anzi listened in the shadows of the room, more intrigued than afraid. At the end of the piece, a little timid applause started up, mostly in appreciation of Pini’s rendition. Then the clapping grew louder. The maestro was happy. He realized that the song’s spirit had been understood and the piece had won them all over, almost like a bridge between the North and South of Italy.

Like almost all the songs he composed, he didn't think too much about it. Whoever was with him says that it took him a little over fifteen minutes (...)

In those years, Madonina was never included in radio programming, yet, through word of mouth, it spread throughout the city and then through all of Italy (...). It could be heard sung in Milanese with a Neapolitan accent, whistled by workers on bicycles and at the closing the "Piedigrotta" at the Trianon. It was October 21st, 1935. From that moment on, with the song deposited at the S.I.A.E., it became part of the Italian pop music repertoire. First of all with D'Anzi, who performed it himself, then all the performers who sang it and sing it today, including us who join in with half a voice at band concerts or parties.