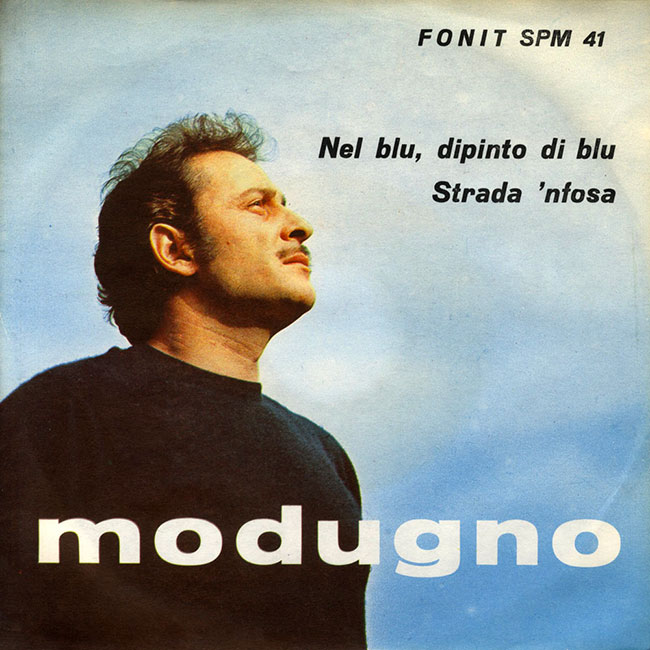 In the blue-painted blu (Volare)

I was living in Rome back then, in Via Vittoria. Modugno was a generous friend, with advice and money. He was already earning well. He was performing as a singer and actor and appeared on TV. Since he had a car, one day he invited me to go to the beach. The following day I was in Piazza del Popolo at 10 a.m. ready to go. I waited for hours, but he never showed up. I was furious. I later learned he had gone to the beach with Franca Gandolfi, his wife. So, I went back home. I only had 300 lira on me and decided to buy a bottle of Chianti and get drunk. I fell asleep and when I woke up – I was still half-asleep – I found myself looking at the two Chagall reproductions hanging on my wall. One was La femme au coq rouge (The Woman with the Red Rooster) with the red rooster flying across a blue sky, and the other was Le peintre et son modelle (Artist and His Model), where the artist's face is painted blue. That's where the first words of the lyrics came from.

What exactly was the first version?

It went like this: “Di blu m'ero dipinto per intonarmi al cielo, lassù nel firmamento, volavo verso il sole, e volavo felice più in alto del sole, e ancora più su, mentre il mondo pian piano spariva lontano laggiù, volavo nel blu, dipinto di blu" (I had painted myself blue to match the color of the sky. Up there in the heavens I flew towards the sun, and I was flying happily higher than the sun and even higher, while the world was slowly disappearing far beneath. I was flying in the blue, painted blue.)

The last comma is important because it changes the entire meaning. People still ask me whether there is a comma there or not. This was the very first version. Notice that all the verbs are in the imperfect. That evening I met up with Mimmo in Piazza del Popolo. I told him I had written something, that I had jotted down a crazy idea for a crazy song.  He became impatient and asked to read it. I insisted on explaining it first, until he ripped the piece of paper from my hands. He read what I had written and burst into laughter. He said, “It's going to be a huge success.”

How did the version we all know come about?

By arguing furiously. Six months of heated arguments. One was over the word ‘trapunto’ (di stelle) (quilted with stars). He said, “You have to be at the service of a singer and I'm telling you that I can sing that word very well.” But the song was missing an outburst. It was compressed. Franca told me about something she had witnessed one day. Mimmo was standing in front of the window and a gust of wind suddenly blew it open, and he cheerfully shouted, “Volare! Oh-oh” (flying, oh oh). I loved the Futurists, so I immediately liked the the idea of that sequence of verbs: flying, singing. We eventually finished the song. I still have a copy of the old version, recorded in the RAI studios. But, I have never pulled it out. Mimmo and I made a deal and I've always kept my promise.

How do you explain the extraordinary success?

It was a magmatic period, but also limiting and boring. We were young. We wanted to turn the world upside down. We were living in our fathers' world. I remember how I had to fight to get out of becoming an accountant. It was a period of reconstruction. I told my father, “Please let me study to be a surveyor, at least I'll be able to draw.” But he replied, “No. An accountant. Because I have a cousin who works in a bank and who can help us.” Extremely important was the singer opening their arms while singing, because it broke away from the style of those days. And, the conclusion was strange, with that dry, unemphatic “with you”. The song in line with all the novelties of those days: artificial satellites in space, the inauguration of The Festival of the Two Worlds, stereophony. It was as if all our wishes were coming true.

Were you immediately aware of what you had at hand?

The future of the song seemed predestined. As crazy as it seemed, the music publishing company and those who selected the songs for the Sanremo Music Festival liked the song, but no one wanted to sing it. We presented it as authors. The singers said it was “neither earth nor sky”. We replied that this was natural, considering the title,Volare (to fly). It was Achille Cajafa, artistic director of the Festival, who said, “The audition is good. Why can't Modugno sing it?” In order to find a partner we had to look for a novice singer. Someone who had nothing to lose. The choice fell on Giannini Dorelli, who of course accepted. But the other singers weren't at all happy. During rehearsals I was seated in the theater, and since no one knew who I was, I began speaking freely of Mimmo saying terrible things about him. I'm not going to say who it was, but a lady singer said, “Can you believe it? This gypsy!” Another lady singer said that he had bad breath and body odor, and that he should take a bath. The fact was that they felt threatened. It was a real game changer. I remember they had to console Nilla Pizzi, who had been sure to win with L’edera. The other singers were put together and polished. Mimmo was loose, natural. His voice wasn't structured. Massimo Mila said the same thing: Mimmo expressed the man he was and not the singer.

It was a instant success.

I only realized it while I was going back home by train. I stopped over in Florence to visit my parents and I could occasionally hear someone shouting, “Volare, oh oh!” My father said, “Franco, what happened?”. He had decided I was beyond redemption. When we won two Grammy Awards and the song became a huge success in America, I said, “Great! So we can take a nice trip.” I remember an issue of Paese Sera that came out with a 4-page insert with blue borders, in which politicians, psychologists, artists and scientists tried to explain the success of the song. One person even claimed it was a sexual metaphor.

Why did you stop working with Modugno?

It's hard to say. There was an odd artistic jealousy, which can sometimes be stronger than the jealousy in a romantic relationship. He had many options as far as authors were concerned. Pasolini and Quasimodo wanted to write for him. But by then I had become an author by trade. I had success writing for others: Mina, Morandi, Nada. We stopped working together, but when he was already ill, I wrote a song for his son Massimo, Delﬁni. They sang it together. It wasn't a hit, but every time I hear it I become teary-eyed.