It is one of the early masterpieces by the Garinei-Giovannini-Kramer trio, written for the review Gran baraonda (1952) - with Wanda Osiris and Alberto Sordi - and performed by the Quartetto Cetra, which made it its own workhorse as well as a model of the show song.

The song has in fact had a life of its own as a 78 rpm single, later included in various 33 rpm anthologies and re-recorded several times in the CD era. The text and music pay homage to the temple of Milanese opera, the voices that made it famous, the musicians, operas and fashions in a nostalgic approach towards what has been a ritual for over a century: the shared passion for great music, with its convivial side (“the appointment in the buffet/a sip of marsala/two or three marron glacés/and at the exit, the flower seller of La Scala/ offers a bouquet of pansé). Already from these sophisticated rhymes in a French that, then more than now, was an integral part of the Italian language (of the elite…of course) you can sense the condescending conceit of a bourgeois audience that celebrates its own myths and validates its certainties at La Scala.

The song is set “in January of ‘93”, which rhymes with décolleté and coupé. The Milan that counts came to applaud Tamagno, Bellincioni and Stagno (stars of the pre-record era), in a line-up that includes Massenet, Bizet, Verdi and Puccini. Then came Mascagni and Zandonai, and then the waltz - here the music passes from swing to three quarter time - then replaced by An American in Paris brought by Toscanini - and in this case too we hear the quote from Gershwin. Kramer was one of the most important Italian jazz musicians and the Cetra – who had already grown up with the legend of jazz - have assimilated its spirit with humour, creating one of their most successful interpretations. 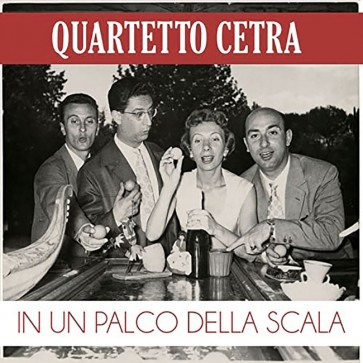