On more than one occasion, many authors and composers of the Neapolitan song tried their hand at the Italian language, generally with great success. This is also the case with Amor di pastorello, which in 1913 was debuted by Giuseppe Godono, an operatic tenor lending his voice to light music, the first in a long series, given that it was also recorded by Enrico Caruso, Beniamino Gigli and Ferruccio Tagliavini.
Bovio uses curious words to describe the hours in the day of the shepherd boy (actually mentioned only in the title), the song’s protagonist: he awakes to the rooster’s crowing, first Mass at 7 am, observes that his sweetheart is still asleep at noon and prays to the Madonna to make her wake up, otherwise that love will stay amid the tears and dreams of youth.
Bovio may have written better lyrics, but the song’s seductive power lies entirely in the melody, which quickly makes the listener forget the meaning of the lyrics, mainly when the voices are those of Elvira Donnarumma or Carlo Buti, in the elegant performance we offer here. It was also recorded later by Claudio Villa, Giuseppe Di Stefano, Luciano Virgili, Otello Boccaccini, Aurelio Fierro and, paradoxically, by Renato Carosone, and the vocal sextet of Piero Giorgetti, with the lyrics stripped to the bone and offset (given the rural atmosphere) by sounds of bird calls and farmyard animals. 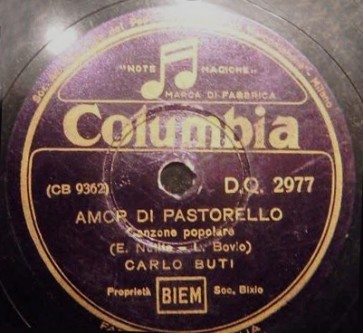